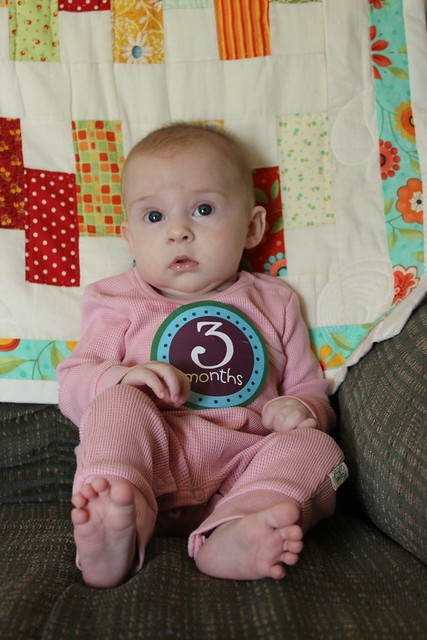 Three months of this cutie pie face brightening our lives. 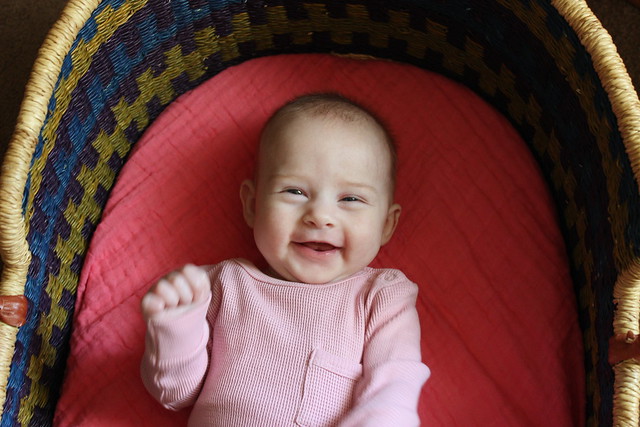 She is a pro at holding her head up and insists on sitting up as often as possible.  Her hands evidently taste extremely good because they are constantly in her mouth.  In fact, I had to work hard to get a picture where I could actually see her face. 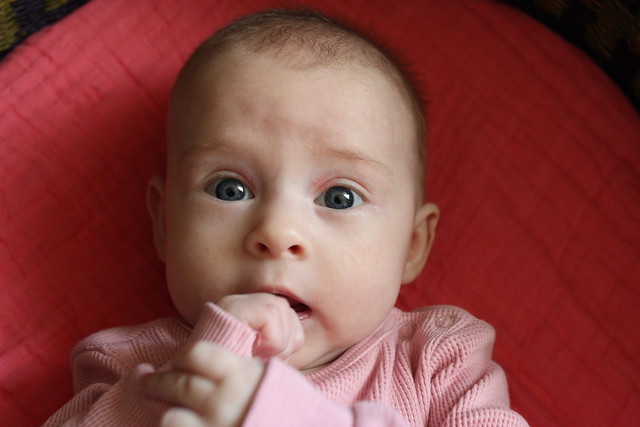 She's a big time mover and shaker these days, and unless she has something to hold her in place there is no telling where you might find her.  I can only imagine how mobile she'll be in another month.  I'm not quite sure her big sisters know what they are in for when they say they can't wait until she's big enough to play with them. 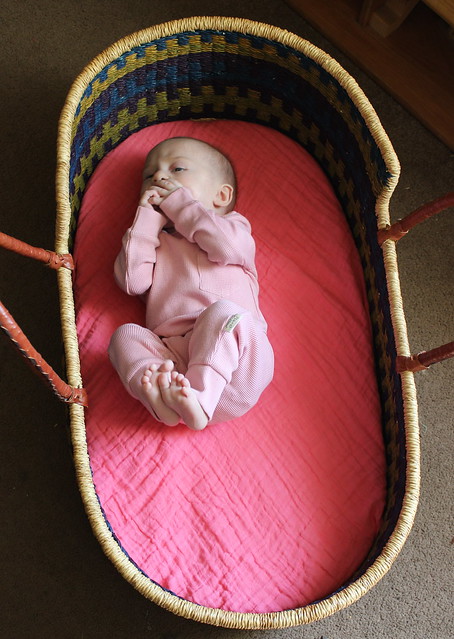 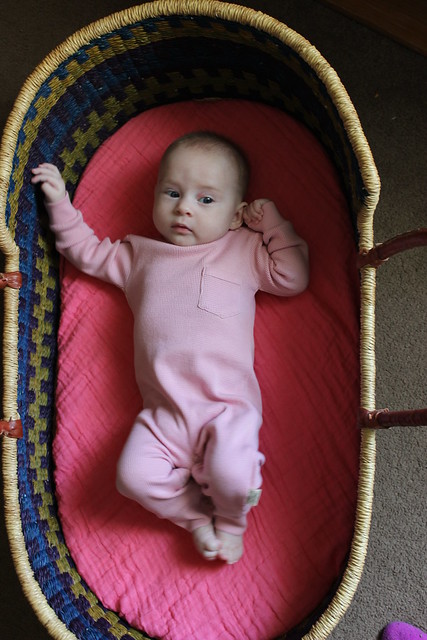 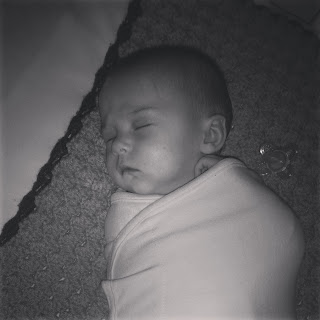 I'm learning a lot, already,  on this journey of being a mama to three.  One would think that by the time baby three comes along you'd have already learned quite a lot, however I am finding this to be untrue.

One of the things I'm learning is that as your children get older and you can begin to reliably regain a normal amount of sleep at night you really forget what those sleepless nights were really like.  And once those sleepless nights begin again you find, in my case at least, that you have a much harder time physically adjusting to them than you did before.  I swear I used to be able to get zero sleep and still function like a somewhat normal human...though I might have been a few years younger then.  Ahem.

I've battled a bit of a cold all week and it left me feeling very run down, and quite frankly just plain exhausted.  I was so thankful when Saturday rolled around and my amazing husband was able to step in and let me sleep as much as humanly possible in an effort to get caught up on some much needed restoration.  I awoke feeling refreshed and ready to tackle the laundry list of projects I had procrastinated on all week - and the actual laundry.  I also awoke with a bit of a headache. Nevermind that, press on!  There are things to tend to I told myself, but eventually the headache won out.  By the time our evening routine started my head was pounding.  It hurt to move (heaven forbid I had to bend over for something) and nothing seemed able to combat it.

I was relieved when even the tiniest girl seemed settled down for the night.  I gave myself just a few extra minutes to sit before heading to bed, but just as I was ready to start towards bed, someone decided it was time to wake up again.  And so has gone our night.   We've slept possibly a grand total of 2 hours tonight and my headache has not improved one bit.

Yet as I sit here in the early morning hours typing this on my phone while rocking with a fussy and restless baby in my arms, I can't help but notice how differently this scenerio is playing out than it might have in years prior.  I'm not lamenting over the lost sleep, and wishing for the days that, when I put her in bed she actually stays there for the night.  Sure, tomorrow I will be exhausted, and I'd never turn down more sleep if it were offered, but those days will come in due time.  She will never be this small again.  I will never have the chance to rock her at this exact age again after this, for each day she grows a bit more.

Our oldest two don't need rocking to sleep anymore, in fact they're becoming more and more independent with each passing day.  So tonight I rock, and ponder, and cherish each sleepless moment while it lasts because I know all too well it will quickly - much too quickly for my liking - flow into the next stage of mothering.

So maybe I have learned a thing or two along this journey of motherhood after all...if only I had learned to like coffee.  Yawn.
at 5:02 AM 4 comments:

There aren't a lot of handmade gifts to share from this holiday season.  As the days crept closer and closer to Christmas, more and more things were taken off the list.  There were no late nights scrambling to finish gifts and so there were no exhausted and cranky days caused by lack of sleep.  I found myself tucking my girls into bed and following suit soon after, knowing that any sleep I missed would be due to the littlest of my girls and so I needed to grab every minute I possibly could.  It felt strange to look back and see only a handful of handmade this holiday, but it feels good to know that I was finally able to step back and realize that overextending and exhausting myself wouldn't do anyone any good.

There was one holiday gift that I made sure was put to the top of the list this year. 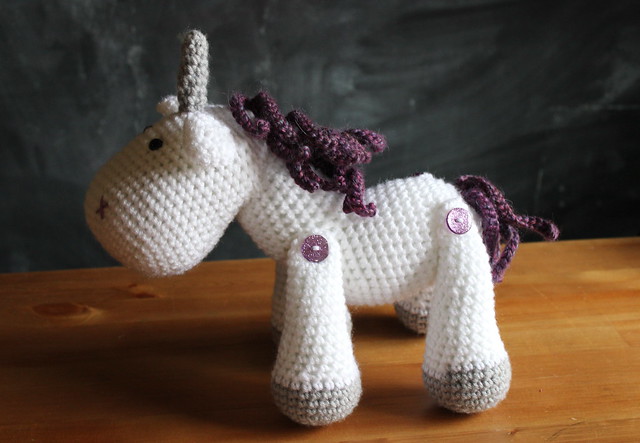 A certain 5 year old in our home just happens to love unicorns.  I have had this pattern for ages and just never could manage to move it to the top of the crafting to-do list before now.  I was determined to finish it while unicorns were still a favorite, you never know how long that might last after all. 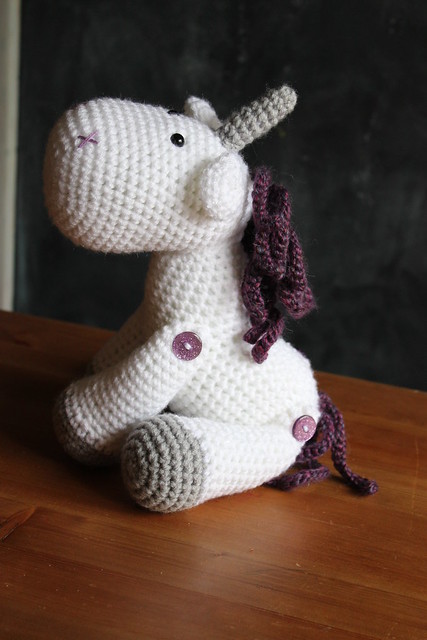 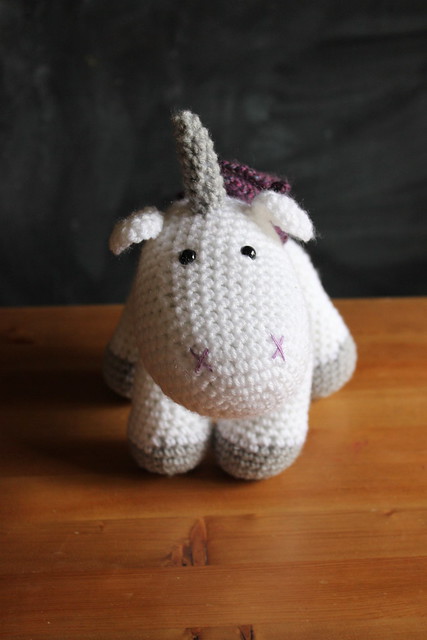 I used the Luna pattern from Madison's Craft Nook.  I would definitely recommend using this pattern, it was incredibly easy to follow and the end result is incredibly adorable.  I didn't really make any changes other than I didn't sew the rear legs quite as tightly to the body.  So, while it will still stand, I wanted it to rest in more of a sitting position. 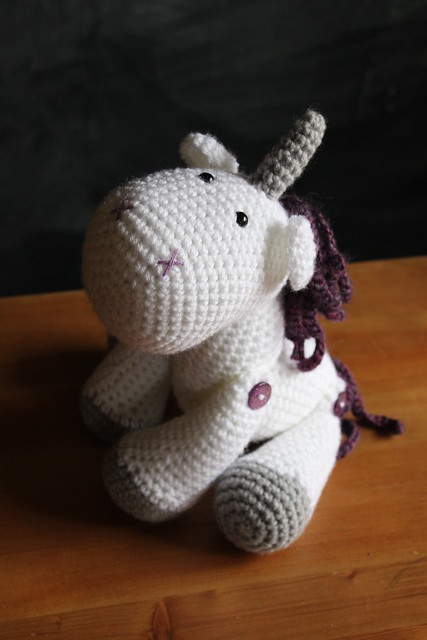 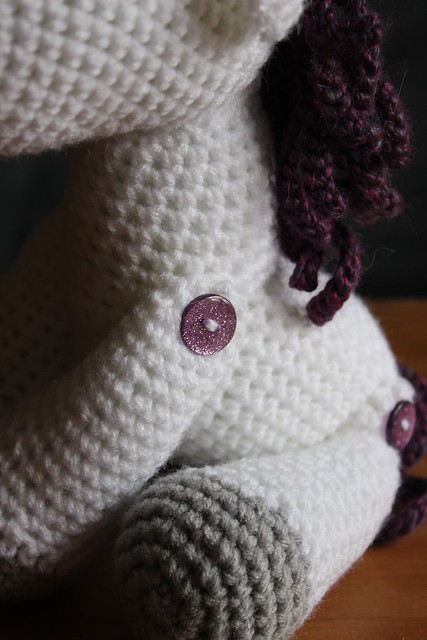 Those sparkly purple buttons!  I really want to make another unicorn in rainbow colors next, and I might make the mane just a bit longer too.
at 1:28 PM 2 comments: 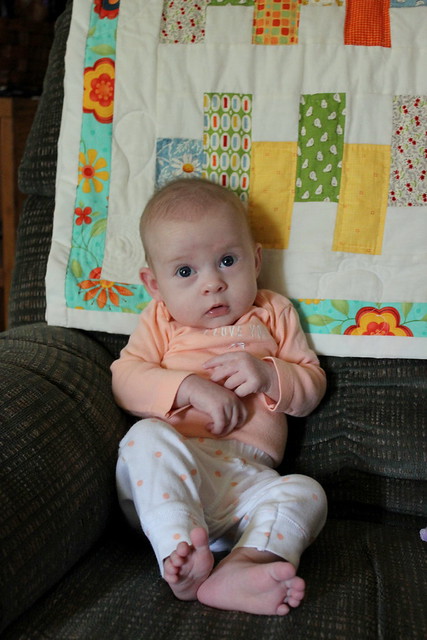 Our sweet Paisley is two months old now.  Though, I don't think you'd be able to convince her of that.  In her mind, I'm certain, she's much much older.  She very much prefers to be sitting up at all times and absolutely lets you know in no uncertain terms if you don't believe her.  She uses all her might to sit up any time you try to recline her at all.  Tummy time is not for her, though I sneak it in without her knowing by laying her on my chest.  She thinks she's simply lifting up and looking about for fun.  She has also discovered her hands and is becoming quite proficient at getting them to do exactly what she wants, which is mostly going right into her mouth so she can chew them a bit.  A slobbery mess of a thing, two months.

Her laughter is coming more often these days.  You're most likely to hear it if you tickle under her chin, or if you happen to simply be one of her big sisters.  Those two are evidently quite the humorous pair.  Of course, it's nearly impossible to catch the laughter on video.  I'm determined to manage it one day soon though.
at 9:28 PM No comments: 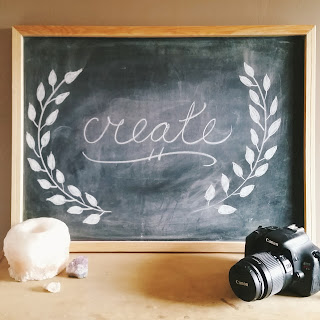 2016.  A new year.  Typically this time of year means a new list of resolutions being made.  Lists of things you want to accomplish, and yet rarely seem to manage.  It just seems like such a harsh way to start off a new year full of mystery and potential.

A few years back we simply decided to stop making them.  That doesn't mean I don't have goals and plans and dreams for the new year, it simply means we've decided to approach it a bit differently.
Instead of making a list of tasks to complete we decided to choose a word, a single word, to represent the new year and its potential.  A theme, something to guide our thoughts and actions throughout the year and hold our focus.

In years past we've chosen words like gratitude, simplicity, and explore.  This year was a bit harder, nothing seemed exactly right.  I mulled over the hopes I had for the new year, and what I wanted not only for the family but for myself as well.  Compassion, kindness, reverence...all these words seemed so wonderful and are, of course, great to keep our focus on.  Yet, they weren't "the word" that we needed.   One word kept popping into mind and over and over again I kept dismissing it.

Create.  That couldn't be it.  What does it even mean really?  It's much too simple afterall.  Yet there it continued to sit, right in the middle of my thoughts, and suddenly I understood.   Of course!  Create.

Not in the obvious we're a crafty household and we like to make things kind of way either.  But in the you create your own destiny so get out there and make things happen kind of way.

It seems obvious now, the perfect word for us for 2016.   I cannot wait to see the year that we create.

Christmas this year was a bit different than in years past for us.  There were less activities, less busyness, fewer handmade gifts made, and even fewer photographs taken.  Somehow it just seemed right this year. 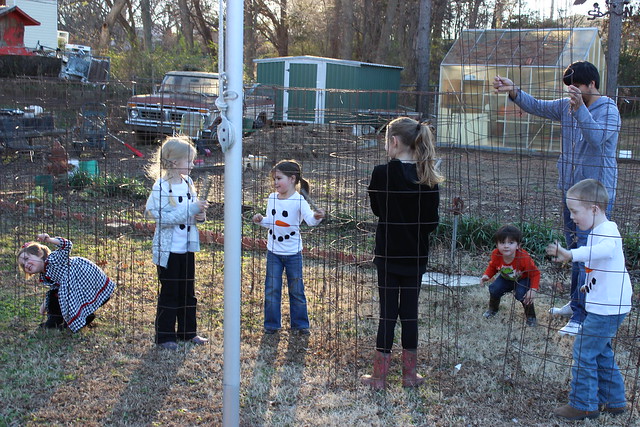 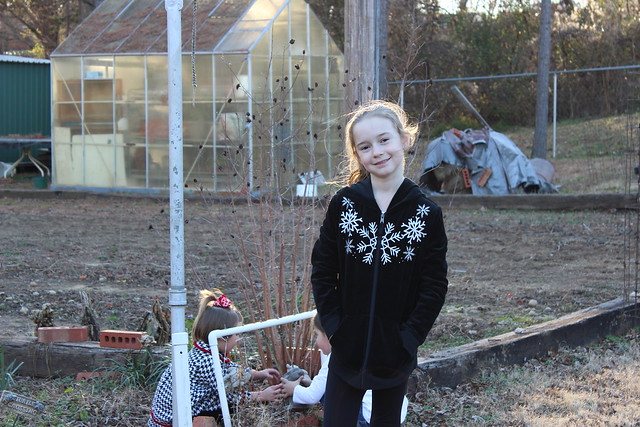 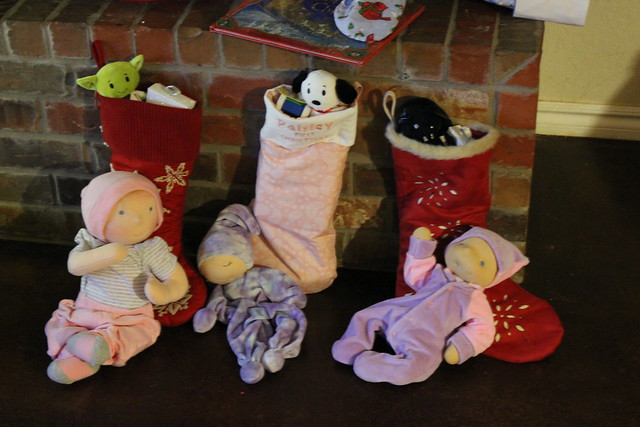 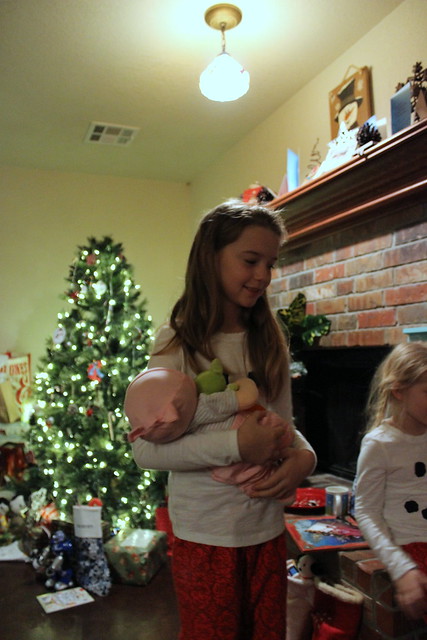 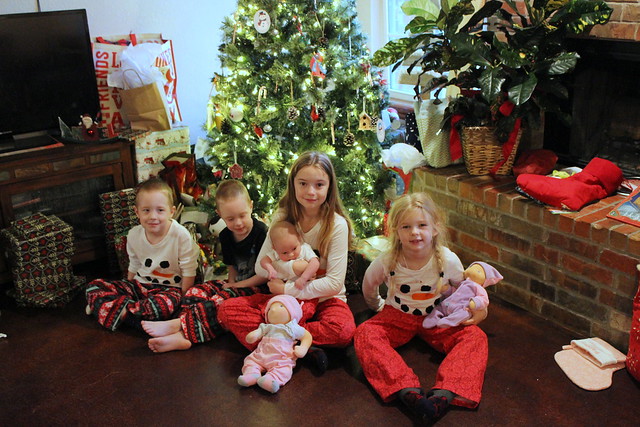 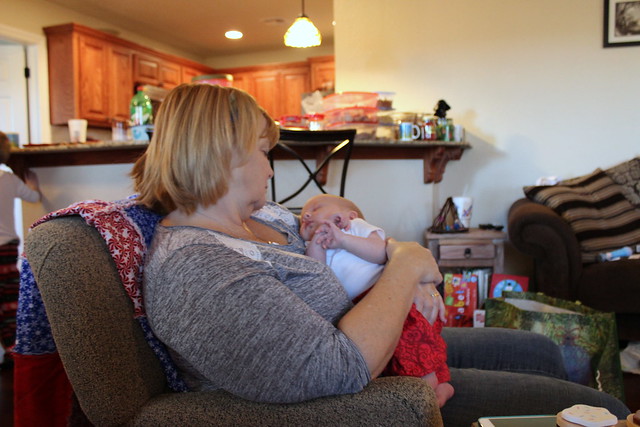 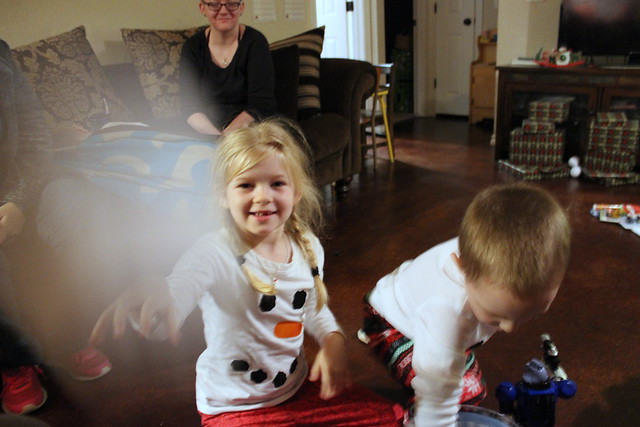 This is what it looks like when you get hit with a snowball as you're taking a picture, just in case you were wondering.  Sneak attack.   New jammies from Grandma, lots of giggles, and an indoor snowball fight or two made this Christmas just exactly what we needed.
at 8:57 PM No comments: 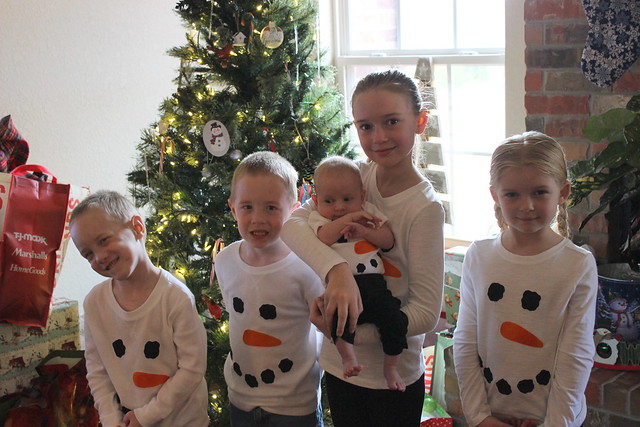 A few years back I had the wild idea to make all the little cousins matching reindeer shirts for Christmas Eve.  They were all so tiny back then!  Well four years later we've added two new cousins, so of course new shirts were in order.  Because why not make 7 matching snowman shirts with a 6 week old baby?  Doesn't everyone do projects like that? 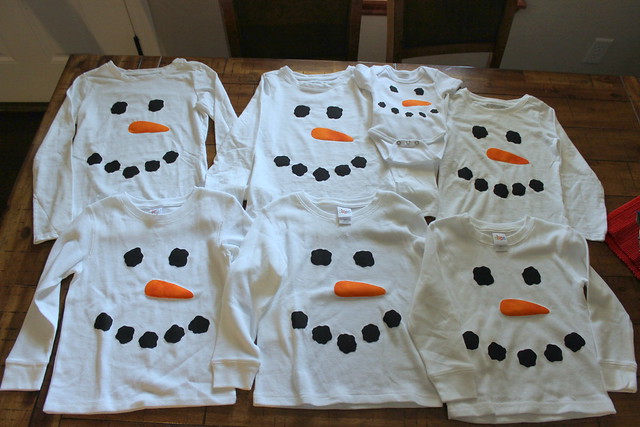 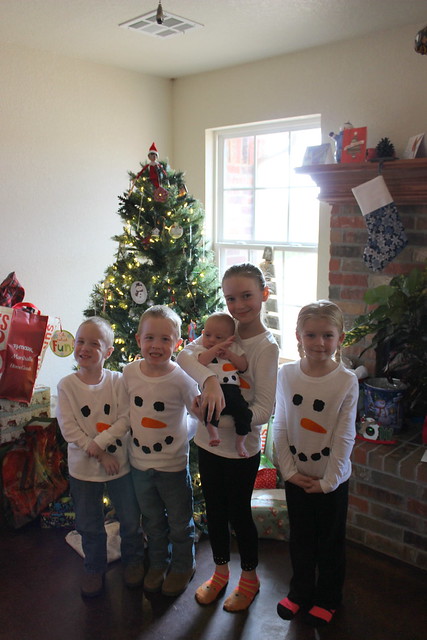 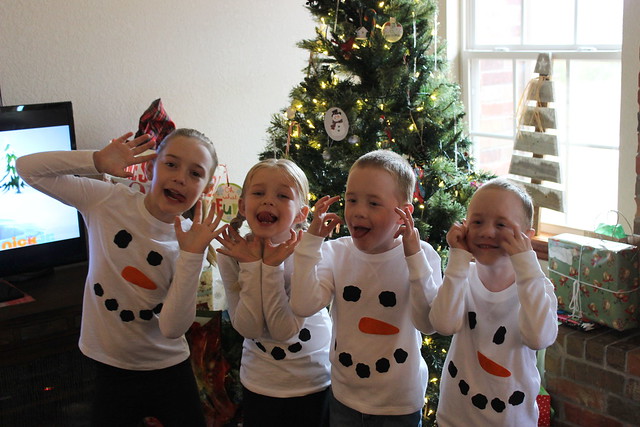 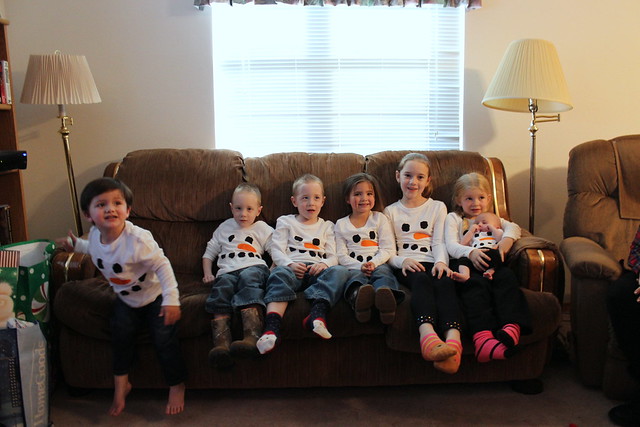 We even managed to get all of them into one picture and some of them looking at the camera.  Even though we had one snowman that would have much rather been a dinosaur and not part of the picture, I'm still calling it a success.  And how cute is this?

Amanda @RusticRemnants
Welcome! I'm so glad you found me and our little slice of happiness. I'm a mama to two very energetic girls, cook, crafter, gardener, homemaker, seamstress and more and you'll see all of that right here as I try to capture these little moments in time and love.